Weekend wasn’t the greatest again.  Saturday was a really nice day, but Sunday was a rainy, cold day.  Supposed to warm up again, so we’ll see.

It is with sadness that I report the passing of Doc Shoemaker on the 2nd of May.  He was a nice man to everyone and an icon of Dushore.  He will be deeply missed.  There will be a viewing on Friday, May 11th, from 1-6 p.m. at Dean Homer’s.

Got the following e-mail to share:   Andrew Sysock Sr., 94, of Clark, NJ,  WWII Navy veteran, one of nine brothers who served in wartime, entered into eternal rest on Monday, Feb. 12, 2018. Andrew Sysock Sr. was born in Lopez, Pa., to Anthony and Catherine Sysock. Mr. Sysock proudly served his country in the Navy during World War II. His eight brothers also served their country during World War II.   Andrew Sysock Sr. was a member of White Ash and his passion was hunting, fishing and picking blueberries. Mr. Sysock was predeceased by his beloved wife, Margaret  Sysock, eight brothers, and two sisters. He is survived by his devoted children, Andrew Sysock Jr. and Nancy Pilot and her husband, John; his cherished granddaughter, Kristal, and great-grandson, Roman.

Bob and JoAnn McGuire spent the weekend in Forty Fort with his sister, Lola and Mike Mattie.  They also visited with Michael, Georgia (Mattie), and Mcguire Martin.   Bob, aka, UVBOB, did the fluorescent mineral programs at the Mineralogical Society of Northeast Pennsylvania annual show held at St. Joseph’s Oblates Seminary in Pittston.  There were also dealers selling a variety of mineral/fossil related items and they also have a great educational program that kids took part in.  Was a nice weekend with many in attendance both days.

Bridge project in town is coming along.  They are working on the one side, so it is one lane right now.  Haven’t had so much excitement, other than the bear all over town.

There will be a park clean up on Saturday, May 12th, 11 a.m.  Volunteers are needed.  Meet at the Pavilion.  Many hands make light work.

Don’t forget Mother’s Day is Sunday, May 13th.  Spend some time with that special Mom and have a great day.

Election Day is Tuesday, May 15th.  Don’t forget to get out and vote.  Having said that, the next Civic meeting will be on WEDNESDAY, the 16th, 6 p.m. at the Township Building.

Happy Anniversary to Tim and Bobbi Jo Brown as they celebrate on the 21st.  Have a nice day.

Joe Fanning, Landenberg, and a couple of his friends, spent the weekend at his home on Church Street and went to play horseshoes in Benton on Saturday. 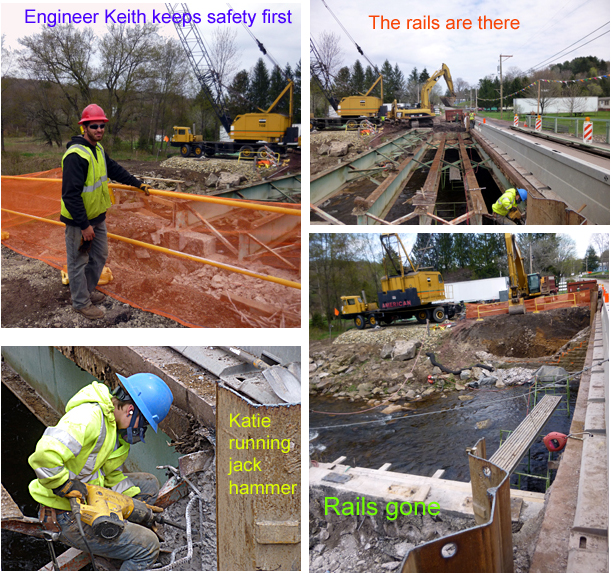